The art community has some interesting dynamics where people try to re-interpret existing works with their own aesthetics and understanding of it. Of course, part of this is that art allows this re-interpretation to begin with; there are no right or wrong answers in art.

I often go around saying that programming and mathematics can be seen as art forms, too, but it just struck me that I don’t know anything like this in the programming scene, at least (and I’m not familiar enough with the mathematics scene to comment on that).

Which then led to the question: “What would a ‘Coding Cover’ (for lack of a better name) look like?”

Honestly, this all started because I’m now being dragged back into Vocaloid hell. Vocaloid is a vocal synthesiser program that is particularly popular in the music producer community in Japan, but also elsewhere. Hatsune Miku is undeniably a global phenomenon.

But this isn’t about Vocaloid itself, rather it’s about the community that grew around it. In particular the やってみた (yattemita, “I tried to do this too”) culture that grew around the popular video sharing service Nico Nico Douga in Japan—which works in ways that are similar to YouTube.

Creators would post their original work in Nico Nico Douga, and fans of it would then post their own versions—their own interpretations—of the work. This is a sort of remix culture that’s very dear to my heart, as everyone is encouraged to take existing works and add their own aesthetics to it: they could do their own take on the vocals, try a different instrumentalisation, try to come up with music videos inspired by the song, their own visual interpretations of it in form of illustrations, or even original choreographies.

Some of this culture does exist in the Open Source community for sure, but not with the degrees of freedom that you have in the artistic community. Modern open source feels more like a corporate game, mostly, in any case, than any form of creative expression.

If you’re not familiar with the above cultures, read below for a brief explanation of them.

Singing covers end up in the (歌ってみた, “utattemita”) category. For example, take the original Envy Baby song by young (but popular!) producer Kanaria, and sang by the vocaloid GUMI. The song was covered hundreds of times by different (and similarly popular) artists, such as Polka, Mafumafu, Astel and Ollie, and Reine.

Even though each of these covers undeniably reads as the original song, the personality and aesthetic sensibilities of each performer still shines through it, turning each of these takes into a fresh song with new things you can obsess about—you can listen to covers the entire day without getting tired of it.

Some artists will choose to express their personality through carefully choosing how to stress certain parts of the song, such as in Polka’s case. They might vary the pitch and key, like in Mafumafu’s case, or try a different dynamic in the singing portions, like in Astel and Ollie’s case. They can pick a different instrumental altogether, like in Reine’s case, to help give the song a fresh feeling. Some artists will even translate the song to their native languages and adjust the beats.

Though covers don’t need to be done by different artists to bring in different interpretations. For example, consider the original song 限りなく灰色へ (Close to Gray), produced by Surii, and whose main singer is the voice actress Minori Suzuki. The singer later did her own take on it, and explained that, in her cover, she wanted to explore more of her characters’s feelings of frustration and wanting to improve as an illustrator.

NOTE As a heads up, you can read all of the songs in this section as being about depression, abuse, suicide, or something along these lines, so, uh, just exercise due caution depending on your current mental state and understanding of Japanese.

The dance cover (odottemita) community is a bit more interesting here because it doesn’t necessarily mean they try dancing an existing choreography; some songs don’t even have one to begin with. Members of the (now dissolved) Danceroid group would often come up with their own original choreographies, like in Manako and ATY’s 自傷無色 (Self-inflicted Colourlessness).

Dance expression is also conveyed through costumes, and these groups would often do their own styling (sometimes DIY sewing), and handle video editing, as well as other aspects of visual production, as seen in Ikura, Maam, Yuzuki, Yakko, and Manako’s 戯言スピーカー (Baloney Speaker).

Sometimes they’d do smaller projects that integrate dramatic theatrical performances, intertwined with the choreography through some more complex camera work, as in Yakko and Wata’s 夢遊病者は此岸にて (A Sleepwalker Gazing on Nirvana) (content warning: the video includes depictions of violence too).

For odottemita, rather than one specific component of the original song being replaced, like the vocals in utattemita, a new component was added to express the artists’ aesthetic sensibilities, and in turn could give rise to new interpretations for the song.

In some cases, artists might not limit their performance to just their interpretation of the song, but wave their own stories on top of it. For example, Yakko and Wata’s cover of A Sleepwalker Gazing on Nirvana ties into their earlier cover of an entirely different song: 夕立のりぼん (Yuudachi no Ribbon), featuring Penta as an additional dancer, and in this case working as a prelude to the scenes of the duet dance cover (even though the songs themselves have nothing in common).

Draw This In Your Style

The 描いてみた (egaitemita) culture exists for illustration, but I’m not particularly familiar with it, so I’ll instead discuss its possible “western counterpart”: the “Draw This In Your Style” challenge. This is art form where you try to recreate an existing artwork, but imbue it with your own artistic sensibilities. The most popular run of this was, probably, the Sailor Moon Redraw trend in social media, where many artists rushed to provide their own re-interpretation of a scene of the 90s animation featuring the main character Usagi.

How they chose to interpret the scene could be seen on colour choices, background choices, new props and effects, or similar changes around the original drawing—but they still read as the original scene. When I decided to participate, my choice was to make the scene more dramatic through some changes in Usagi’s expression, whereas the remaining changes were deliberate liberties that I took with it because I found it fun to do so. 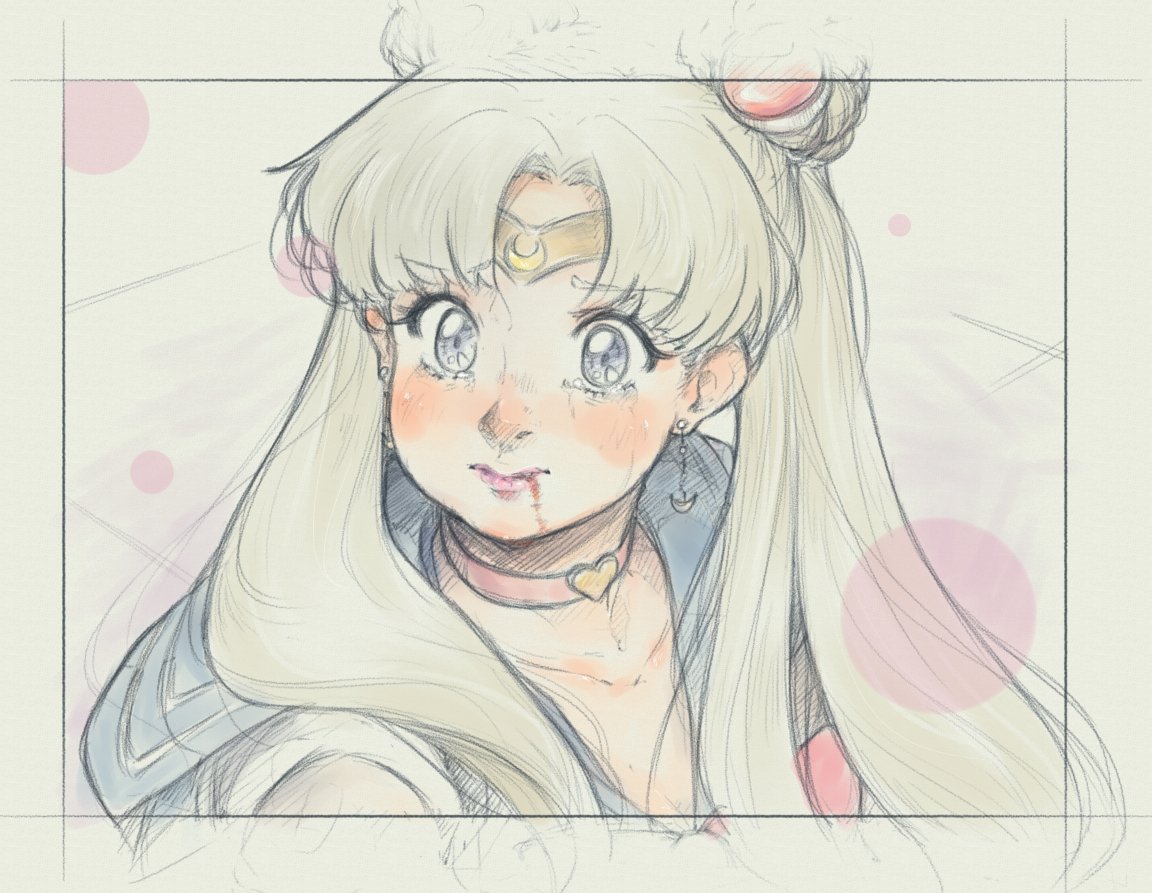 My personal interpretation of the Sailor Moon scene

You might ask: “Isn’t Advent of Code like this for programming?”, but in AoC people are not really interested in artistic aspects of a program in general—they just want to solve a puzzle, code existing at all is entirely incidental. Likewise, “Isn’t (Reimagining a library) like this for programming?” is often more concerned with the functional aspects of the library. So, even though aesthetic sensibilities will inevitably be part of both of these, they’re not an equivalent thing.

Open source work is perhaps more akin to fanfiction culture: there isn’t really a concept of “covering” there; sure you write a fanfiction inspired by a certain original work, and you want your fanfiction to resemble that work in some ways, but it’s more of a “what if…” scenario than a “hey, i understood this part like this” from Cover Culture.

Possibly, the closest thing I have seen is the Todo MVC website, which presents a common problem, and then several different takes on it as showcasing the aesthetics of each different UI library. However, in the way it’s done, it’s still excessively concerned with the functional aspects of producing a working todo-list application, but not enough with the aesthetics of programming itself.

I mean, the whole point of the website is to help you choose one library to get the work done; covers are not about functionality, they’re about aesthetic sensibilities.

Functional Pearls are about aesthetic sensibilities of programming, but they’re not really about a reimagination of an existing work by different people with different sensibilities. So they’re more like the process of designing in general than they are about creating a community around collaboration.

So, as it stands, I don’t know anything in the programming scene that feels like any of the art communities I’ve mentioned. And I’d really like to see something like it. What would a collaborative community around programming look like when aesthetics are emphasised, and where different perspectives around one idea are celebrated as having its own merits?

I might work on something towards that end at some point this year, but if you’re also intrigued by the idea you should definitely go ahead and tackle it too :)