Having recently finished reading the Bloom Into You manga (and the second volume of the Regarding Saeki Sayaka light novel), it seemed like a good idea to collect my thoughts on the series. And in doing so I realised, “Oh! I’ve been blogging on Twitter all this time! The pain I’ve inflicted upon those who were naïve enough to follow me…”

But I don’t really have a blog.

And so it seemed like a good opportunity to start one, too. How much having another different place to publish thing can hurt anyway, when you already have too many of them?

But I digress. Let’s get back on the topic of the Bloom Into You manga.

Note that there will be some spoilers here. 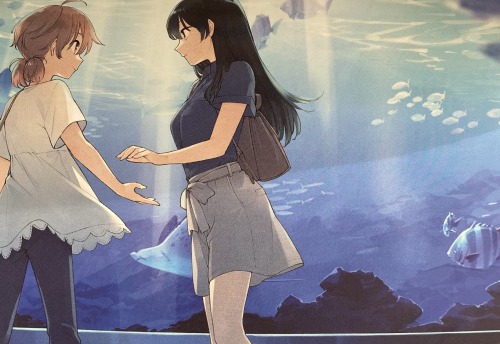 Bloom Into You tells the story of a girl who’s perfect on the surface. She is the student council president, gets the highest grades in school, is admired by her peers—both romantically and non-romantically—, and feels like a person who could do just about anything if she put her mind to it. A majority of the cast believes that, too.

Many of the people who admire this girl, Touko Nanami, come to confess their love to her—just to be turned down without fail. Touko phrases this as “I don’t intend to go out with anyone, no matter who asks me”, with an implication that she doesn’t want to focus on romance at that point in her life. But early on we learn that Touko just hasn’t experienced love—at least not what she expects “love” to be.

Until another girl enters her life, that is.

Yuu Koito is a girl who loves romance series, but has also never experienced love—what she expects “love” to be. So upon hearing Touko explain that the reason she keeps turning people down is that she doesn’t feel “love” for them, Yuu is very enthusiastic about meeting someone like her own self. Someone who has not experienced love. Maybe Yuu isn’t broken, after all. Maybe there are people out there that just don’t experience “love”. Maybe it’s normal. Touko directly tells Yuu that there’s nothing wrong with feeling like that.

But Touko falls in love with Yuu. And although Yuu does not reject Touko’s feelings, she isn’t really “in love” with Touko. Yuu doesn’t understand what “love” is. What it means to fall in love. Nor does Touko understand what her own feelings mean, for that matter. And from there the two of them—and the people around them—embark in an awkward journey of discovering themselves, as teenagers do. The relationship is, at times, very uncomfortable. At times extremely cute. By the end of it, I was quite pleased with how things turned out.

There’s a recurring theme through the series: that people change over time. This is neither seen as a bad thing or a good thing. It’s just something that will happen. How people respond to these changes can be good or bad, of course. The other theme is that “changing” does not mean that what happened in the past is no longer valid. The story revolves around people changing, but also highlighting that at every point in their lives, the person who existed there was real. Those feelings were real. And the interactions surrounding them were also very real. The story doesn’t shame the characters for feeling (or not feeling) things—quite the contrary.

Yuu, Touko, and the rest of the cast are all changing and discovering new parts of themselves. They’re insecure kids, like many people in high school would be. They’re still learning how to navigate the world and their own feelings. How to navigate their relationships with the people around them. And the manga does a good job of guiding this through the course of 8 volumes.

The one thing that first hooked me in the series, back when the first volume was released by Seven Seas, was that the only way I could read Yuu in the first volume was as an asexual girl. By the end of it I didn’t have the same view of Yuu—she had changed just as the theme implied the characters would. But none the less, I still think of Yuu as being somewhere in the ace spectrum—as a demi-lesbian, perhaps.

One thing I particularly liked in the manga is that most of the cast has their own experiences on romance. There is a diversity of sexuality and romantic experiences that you don’t often see in many media—even in queer media. Sayaka is attracted only to women, and she knows it. Yuu isn’t attracted to anyone at the beginning, but eventually acknowledges her feelings for Touko. Touko eventually acknowledges her feelings for Yuu and Sayaka. Maki, another supporting character, never develops feelings for anyone—and he is quite comfortable with that. Riko, the teacher and advisor of the student council, is in a stable relationship with another woman, but she is also attracted to men. None of these characters ever label themselves, but it’s not hard to see them as being lesbian, bi, or ace. 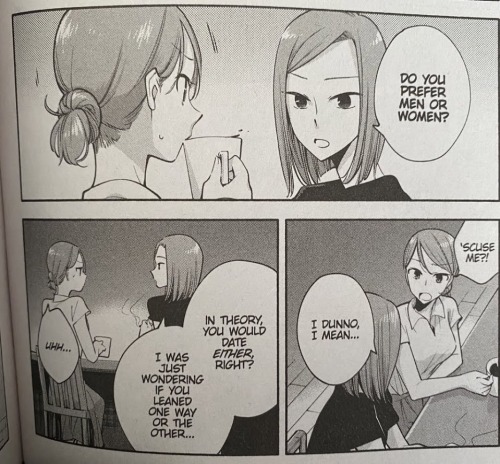 I particularly liked that there was some hint of the characters thinking about labels, though. Yuu worries about it a lot. She feels that labels help her find somewhere to belong, and so she thinks labels are important to her, in that sense. On the other hand, Touko doesn’t personally like labels. She understands that labels approximate something, but she doesn’t like that it doesn’t capture—or allow—the idea that these things will change over time. Relationships, feelings, people. They will all keep on changing, but we still use the same words to describe them, and Touko isn’t comfortable with that.

But it’s not like Touko is forced to see the world like Yuu does. Or vice-versa. Both not labelling parts of their relationship or labelling them are simply accepted. There’s nothing forcing characters to conform to one or the other.

Queer people can grow, too

Though the focus of the story is on Touko and Yuu, their growth, and their relationship, Bloom Into You still has a strong cast of supporting characters. And it spends a bit of time letting you know them a bit better, even when that isn’t immediately tied to how they influence the characters around them.

One of the supporting characters is Miyako, a young woman who manages her family’s café. Miyako is in a stable relationship—and lives together—with Riko, a teacher at the school the cast attends, and the advisor of the student council most of the cast is in. And this aspect is the first thing that catches Sayaka’s eyes. Although Riko is not open about her private life to her students (understandably so, to be honest), Sayaka guesses that they might be a couple based on how Miyako and Riko act around each other. And when she goes back to the café to ask Miyako, this is confirmed. 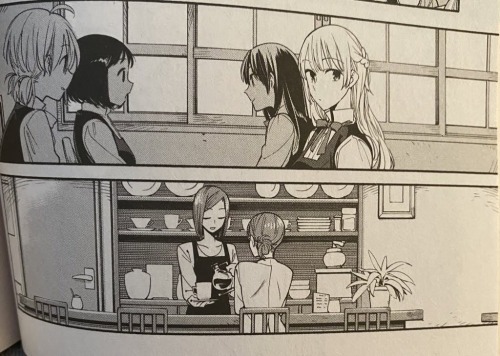 Miyako plays a key role in guiding Sayaka—who knows that she is attracted to girls, but has only had terrible relationships in the past. When we learn that Sayaka’s ex-girlfriend ended their relationship saying that adults shouldn’t be playing at pretend-relationships with people of the same sex—that there was no future in that kind of relationship—Miyako’s existence and her stable relationship with Riko become more important. Queer people can grow and still be queer—and have long, fulfilling relationships, too.

Of course, while this is important in-universe—one can appreciate this small exchange between Sayaka and Miyako even more after reading the spin-off Regarding Saeki Sayaka novels—it’s also important for real people. Discussing queer relationships in media, and showing that we can also live long, fulfilling lives, helps people who might—like Sayaka—be scared of what’s in store for them in the future—or that they have a future at all.

And that leads us to my next topic. I did mention that one of the reasons I got excited for this series, back when it started being translated to English, was that I could read Yuu as an asexual girl. As someone who is asexual, and has had a—let’s put it this way—very contrived journey to accepting their sexuality, seeing characters in media that I can read as asexual always bring me joy.

Asexuality doesn’t get talked about much in mainstream media—if you can call yuri manga “mainstream”. And when it does get discussed, it’s not always in a positive light. So it was really nice to see a series that starts with “It’s okay to not fall in love, too. There’s nothing wrong with feeling like you do.” 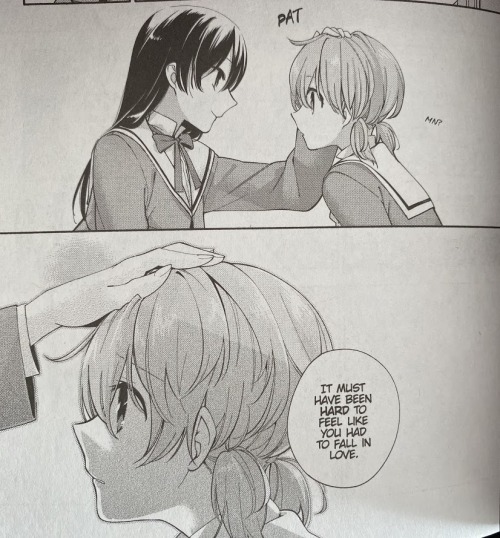 Again, while the characters don’t label themselves, it’s not difficult to see Yuu as being in the ace spectrum. One can easily read her as a demi-lesbian—as she grows closer to Touko, she starts developing feelings for her, and she starts noticing that these feelings are there, but they weren’t really there before they got closer. The story paints Yuu’s idea of “love” and Touko’s idea of “love” in different lights, but doesn’t imply that one is better than the other. They’re both accepted. People just experience things in different ways.

Maki is a side-character that never experiences romance. And he is perfectly fine with this, it doesn’t bother him, and we see that he’s able to live a fulfilling life without being involved in—or longing for—any romance. Now, many of the interactions Maki has with Yuu, where they discuss how they experience (or don’t) romance, come across as particularly creepy. Not necessarily because they’re creepy, but they’re phrased in a creepy way. In the end, Maki acknowledges this and apologises to Yuu, which was still a nice touch.

I wouldn’t say Bloom Into You does a stellar job of asexual representation—whether it was intentional or not—but there’s some representation, none the less. The characters aren’t perfect—which is not a bad thing,—but they grow over time, and they become better adults. To me, at least, it was a good experience overall.

I… started this thinking it would be a very short review. How naïve have I been!

All in all, I really enjoyed the 8 volumes of Bloom Into You. If you’re looking for a queer series that focuses on characters learning to navigate their own experiences around love and relationship while dealing with the idea of everything changing over the time, and wondering what these experiences would mean in the future, I’d say you might enjoy it as well. The art is adorable. The story has a nice pacing—though some people think it’s “too slow”, I found it quite alright. Touko being the image of the Useless Lesbian every now and then was lovely to see. And I particularly enjoyed Miyako and Riko’s relationship. 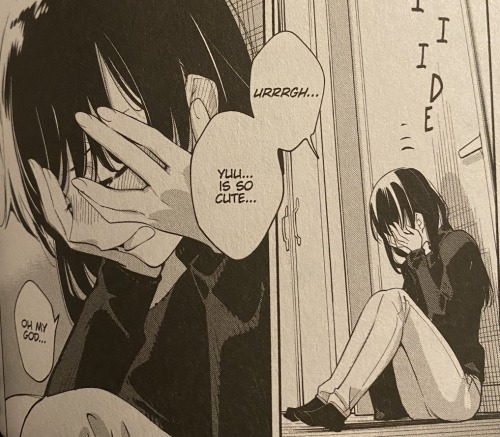 I’m looking forward to the release of the spin-off Regarding Saeki Sayaka volume 3, which follows Sayaka’s experiences in university, taking over from where the manga ends. The light novel really adds more colours to Sayaka’s character, that the manga didn’t have the time to deal with, and reading it has made the experience of reading the manga more enjoyable to me.

I do make some reservations with some translation choices that I’ve found awkward in both the manga and the light-novels, though…

The Bloom Into You manga is published by Seven Seas, in a total of 8 volumes. There’s a spin-off light novel, Regarding Saeki Sayaka , which follows Sayaka through her childhood, teen years, and college, in a total of 3 volumes (with the third one coming out at the end of 2020). The first part of the manga has also been adapted to a 13-episode animation series, available for streaming on HIDIVE.